“The snow doesn’t give a soft white damn whom it touches.”  – E. E. Cummings

Often it is hard for me to set the daily minutiae of my life down into print. So very many things have already been put to paper, what can I possibly add that’s worth the weight?

(A podgy little mistress,
both maladroit and moody,
sat visibly cocooned in comfort,
there upon her booty…)

On days like today, even a first word, an initial sentence, feel impossible. My mind freezes, still and cold, mirroring the world outside.

I wander among the trees, pause beneath the gale, frozen with indecision. Is any of this important? After all, the trees bear their freshly added weight heroically, silently, why shouldn’t I?

Yet the animals, too, seem mute with indecision. Everything looks different on this day, for us all. Note the dog and deer here – they are completely blinded to each other’s presence. They stand impossibly near one another, naive to the mighty scene in which they roam.

As I walk our woods, snow tickles my cheeks, light as feathers. The blizzard swirls, off and on, on and off.  I wrap myself in blankets, nestled inside, molded within my pink-bottomed chair, staring out towards the trees. Curtains of icy pearls cascade from the heavens, yet when I step outside to grab one iridescent prism, feel its weight, tis nothing there, it’s gone.

Two weeks ago Damon and I went whisking into Seattle for a lunch date, visiting old friends, drinking new drinks, feeling both smiley and happy. Then Katriel called. She was ill at school, burning with fever, please come soon, she begged.

We fetched our girl and once home I went inside to tend her, bringing ice packs, ibuprofin, kleenex, gatorade.

Damon went outside to care for the barn animals. In quick order he returned, slamming the front door harshly as he came inside.

I knew something was wrong. Damon never slams a door. Not ever. He shuts doors with a purposeful, painful quiet when he’s mad; an eager tug when he’s happy.

“What?” I ran into the hall. I looked at him and knew it was true.

Damon explained how he’d found Huck as soon as he’d opened the barn doors, bent awkwardly, painfully over the half wall, cold and strangled, his tooth still bound by the baling string it had caught on as he nibbled fresh grass over top the inside half wall.

“I’ve cut him loose and pulled him to the far end of the pasture,” Damon said. “But now I have to get in the car and leave for my gig. We’ll bury him tomorrow.”

“What about coyotes?” I wailed. “Raccoons? That mountain lion we saw down by the creek? I’m afraid animals will come and ravage him in the night!”

“They might. But I’ve put a tarp over him.” Damon pushed the hair off his forehead tiredly. He seemed shook. “That’s the circle of life, Kristine. We’re part of it. Huck is, too. There’s nothing we can do about this now. It’s getting dark and I have to go.”

So Damon drove away, to play his horn, and I went up to the bedroom, to stare out the window at my sweet Huckleberry Ben, now cold and lifeless under an ugly, plastic tarp. The sky became peerless while my mind whirled.

The night before, after work, when I should have been out feeding the animals, I wasn’t. Damon was gone at yet another gig, Juliet was at Crew, Katriel was sick in bed, and I, well, I was bouncing around in my bedroom, sweating to ‘Bollywood Cardio Blast, Dance Your Way to Destiny‘. It was my first time attempting an exercise video in years and I had the volume way up, gyrating my hips while clinging imaginary finger cymbals with zeal.

But at one point during this Bollywood Blast, I heard something – shouts, muffled screams, something. I paused belly dancing long enough to call my sister, check that she and her kids were OK. Yes, she said, only the usual routine over here. I hung up and briefly listened for the sound again but heard nothing.

So back to Bollywood I went.

Now, in the icy stillness, I grasped that it had not been my sister making lots of noise far away. It had been Huckleberry Ben, strangling to death within our pink barn.

I agonized. Why hadn’t I fed the animals, not even checked on them once? Why did it not register that one of them could be making that noise?

I thought the alpacas were fine to go one day without food – after all, the previous day we’d hosted a birthday party, wherein all the animals were fed excessively by gaggles of merry children.

Obviously Huck had been out there while I belly-danced, crying out, desperate for air, stuck with his head caught…maybe all night, perhaps longer. I ached, imagining him suffering out there while I danced like a loon, mere yards away.

“That was the first and only time I worked out this year!” I lamented angrily, pouring gin straight out of the bottle. “Why, oh why did I actually work out?”

The next morning, at dawn, Elijah appeared to shovel a grave. Our boy can dig like no other, and by afternoon he had lowered Huck gently down into his earthen bed. Once the last shovel full of dirt covered the mound, Elijah hopped back on the bus to return to college in time for his evening classes.

I felt extremely grateful to him. Damon was gone yet again, Katriel was writhing with fever, and now Juliet was sick at home, burning up and barfing, too. None of us were in good enough shape to dig a grave in such frosted winter soil.

Saturday it began to snow. There were still left-over balloons from the birthday party the previous weekend, which the neighbor kids trailed as they marched out to visit Huck’s fresh grave. It looked like a scene straight from the 100 Acre-Woods – Pooh Bear and friends with the little orange balloon.

My tears fell like snow, coming and going, wetting my lashes, turning the whole world blue.

That weekend Katriel’s flu morphed into unabated bronchial spasms. After taking our miserable girl to urgent care, we sank into the hot tub to try to recover our morale. In the twilight, Damon appeared oddly green and pallid. I told him he, too, looked ill. Maybe we all did, after our terrible week, I joked. He shrugged and laughed, the snow melting tenderly down his face as well.

The next morning Damon awoke to tell me he was ill. Into urgent care he crept, where by nightfall they’d found a kidney stone, still lodged in his ureter tube.

That day and the next and the next, school was canceled. My girls rose from their sick beds at odd times to wander gingerly outside. Damon worked from home with his pain killers and medicine. My sister came over with her dog, Thimble, and we all milled cautiously about, wondrous with our newfound, visible fragility of health; the instantaneous freezing of daily happenings. 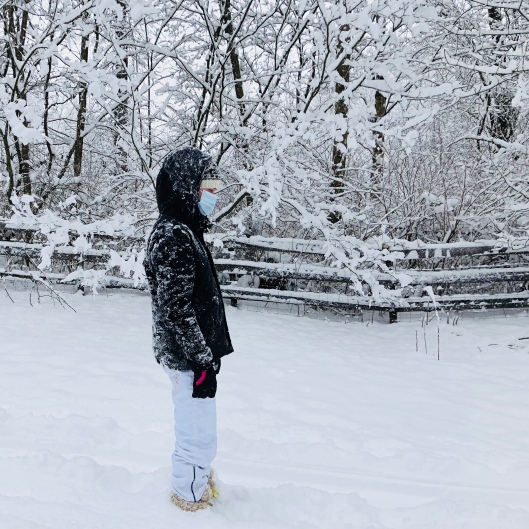 Then Thimble, the happiest of all of us in so much snow, bolted away. Unceremoniously she snatched one of our chickens up into her mouth. With absolute glee this enormous Bernese Mountain/Pyrenees dog scampered over the snowfields at top speed, careening across ice patches, over logs, between trees, all while poor Bixley hung upside down in her mouth, gurgling the most sickening, bubbly sound of despair.

We humans screamed hysterically for Thimble to let Bixley go. “Drop her!” we commanded. Our shrieks only cheered Thimble onward. She leapt across our frozen pond, practically ice skating from one end to the other, Bixley gasping in her mouth, feathers flying everywhere.

At last Thimble approached the fence, thereby forcing a slow down. Now Bixley fell from Thimble’s mouth, landing head first in the deep snow. Sensationally, she flipped over onto her stomach like a hot pancake, then popped up, running straight into the chicken coop frantic and fable-ish as the still warm Gingerbread boy of lore.

I stood frozen in the snow, agape. Thimble was duly apprehended by my tearful niece, then led home in shame, while I nervously approached the coop, fearful of what I’d find.

Miraculously, Bixley was alive. A true survivor, she somehow stood, upright and breathing. Traumatized, she cowered in the farthest corner next to Pickles, the two lone chickens still alive out of the many, many we’ve had over the past three years.

There’s no logical explanation for why a tiny chicken snatched by a dog such as Thimble should live to lay another egg, just as there’s no rationale to explain why Huck had such rotten luck with a fastened piece of baling string.

Some live to see another day, and some do not.

“I wonder if the snow loves the trees and fields, that it kisses them so gently? And then it covers them up snug, you know, with a white quilt; and perhaps it says, “Go to sleep, darling, till the summer comes again.” – Lewis Carroll, Through the Looking Glass 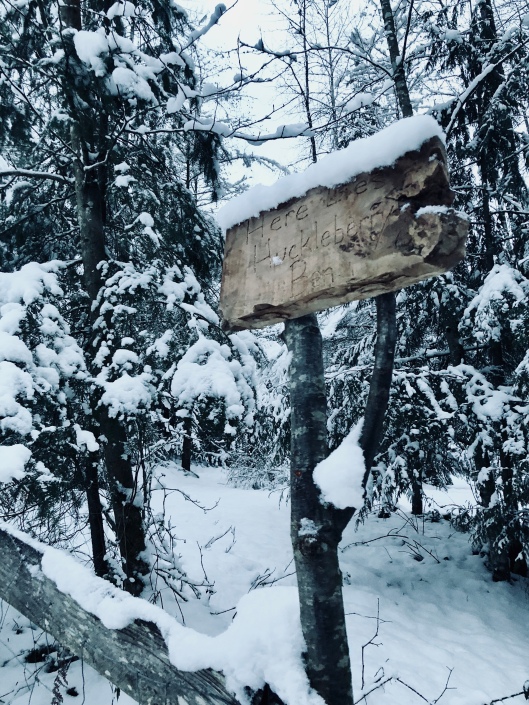